This post is part of a series on amazing blind dogs.
by Diane Marcinizyn

Our interest in Boomer actually started because of our first adopted dog, Lola. Lola came to us six years ago after surviving six brutal years in a puppy mill. As I sat one Friday afternoon in February 2012 scrolling through my Facebook page, I saw Boomer’s face staring back at me. He was part of the adoptable crew on the Desert Labrador Retriever Rescue page. I sort of gasped at how much he looked like Lola and clicked on his biography to see what his story was. When I saw that he had gone blind just two months before, I knew we had to have him. Even though it hasn’t been confirmed, I believe he is related to Lola.

Boomer went blind in December 2011 from Progressive Retinal Atrophy. We’ve never had a blind dog but, as a private caregiver to the elderly, I figured if I can help blind people, I can certainly help a blind dog. Without sounding egotistical, we “knew” we were the perfect family for him. We keep a disciplined routine in our home and the dogs are taught their boundaries from the moment they enter. We have an abundance of love to share and our dogs feel it. It shows in their relaxed behavior and balanced minds.

I found routine and discipline especially key in Boomer’s case as he came into our home with a very dominant and insecure personality. Six years ago when we adopted Lola, (now age 12), we also adopted Luigi three months later (now age 10). So two males and one female can present a problem if behaviors are not addressed right away.

He displayed some anxiety by panting all night long and pacing the house. He wasn’t mapping it but rather pacing in confusion. After a visit to our vet, we decided to wean him off his pain medications and change his diet to the home-cooked diet I feed our other dogs. He started on supplements to support his body (fish oil, glucosamine, MSM, digestive enzymes and a homemade vitamin powder) and began a weight loss regimen with diet and exercise. The panting and pacing soon stopped.

The first few nights, Boomer seemed determined to take over in a dominant way with growling and humping. Each time he attempted to bite the scruff and mount the dogs, we corrected him. They seemed like sweet little love bites but were actually dominant behavior.

On the second night, he seemed frustrated that no one would engage with him. He stood there for some time barking and sort of grumbling at the ground in frustration. Lola and Luigi looked at us for direction as if to say “what do we do now?” Since the behavior wasn’t escalating, we let him get it out of his system and simply stood there quietly. By day three, he understood that we were the leaders of the house and there was no need to take over defensively. He knew we had his back as well as Lola and Luigi’s backs. He then settled in and began giving them head kisses daily! 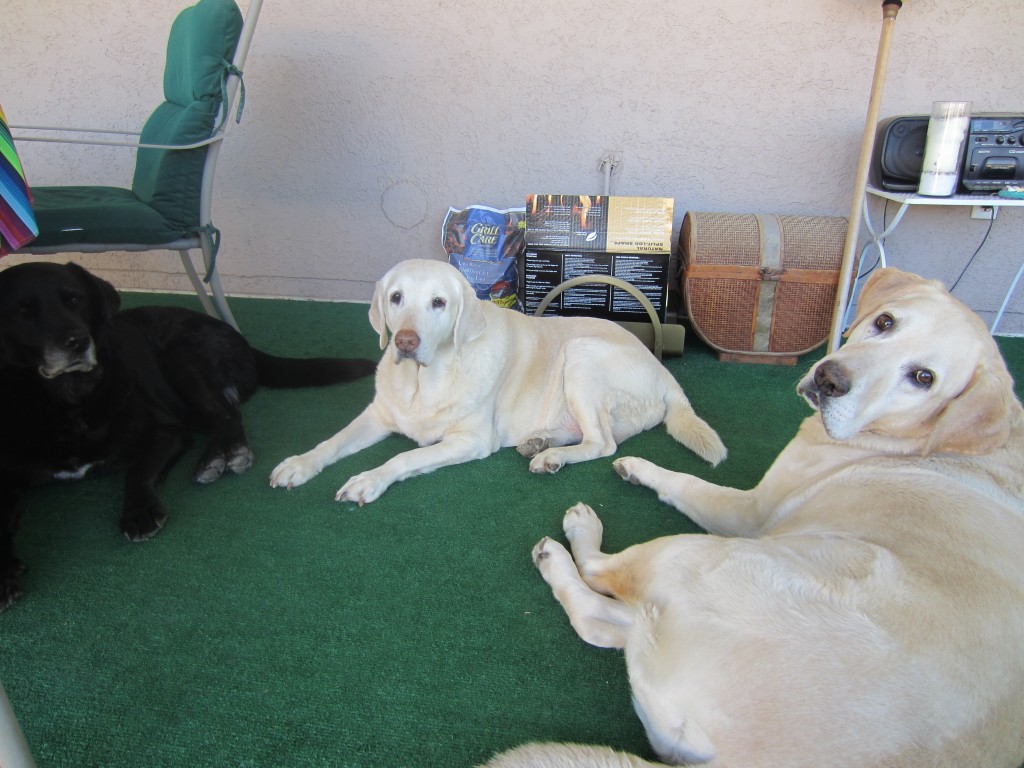 What amazes me most about this beautiful boy is how adaptable he is. He quickly mapped out our home and with a few noisy flaps of the doggie door, he knew which way was outside. He also quickly mapped out our walking path. Before the end of the first week, there was no need to say “cross over” or “step up”. He knew when the pavement changed to asphalt and when it was time to step up to pottie.

I found him sitting in the dark dining room on day two waiting at his food station for breakfast. It broke my heart that he sat alone in the darkness before we had even started preparing food but I had to let that emotion go. It brought me joy to realize (1) he already knew where his food station was, (2) that he was expected to sit for his meal and (3) he was going to be fed. That alone calms a dog when they “know” where their next meal is coming from. As of week four, all three dogs now eat side-by-side with no trouble whatsoever.

Neither Lola nor Luigi swim nor fetch. But guess who does both? Boomer! I stuffed a bell inside a ball that he chases. I am currently working on “STOP”. It’s teaching him to listen to my command at that very moment for a fun item and is also teaching him the same command for danger zones.

After a month of settling in, I introduced him to the pool. I make a habit of opening the gate loudly and say “go swimming”. I bought bells attached to a strap and when he gets close to the steps, I jingle them and say “steps”. I nearly cried when he took his first step into the pool as I knew he trusted me enough to guide him on the leash. Lola and Luigi both joined in to supervise and give him quiet encouragement. The other day, he didn’t stop when I gave the command and fell into the pool. He took a lap and I redirected him to the steps (the bells will take some work). He’s a bit of a bull in the china shop and forges ahead fearlessly. I don’t want to make him fearful but rather instill in him that my command means to stop now…not when he’s ready. After falling in, he left the pool area, mapped out the yard again, and came back to the edge gently without falling in.

Boomer has grown to love both Lola and Luigi but it’s Lola whom he loves dearly. He hangs very close to her and snuggles with her every chance he can. She has always been the lead dog when the doorbell rings or when I leave the room. There seems to have been a sort of passing of the torch from her to Boomer. I assume now that she’s getting on in age, she has taught him to be the leader dog; Luigi is not a born leader. She has relinquished to him pride of place next to my side of the bed and at my desk.

My husband and I had our first party about a month after his arrival. Lola assumed her usual position by the front door and Luigi on the patio. Boomer wandered inside and out meeting guests and keeping close to me in a supervisory way but not a dominant way. I believe they told him in their subliminal way that that’s his job. It’s the only time my husband and are not in charge of the front door. People come and go without supervision. So the dogs take it upon themselves to keep an eye on things and alert us with a bark when someone new enters or leaves.

Boomer knows he is a loved dog and has found his forever family. I found him belly up in bed the other night which indicates to me he is totally relaxed and happy in his surroundings. He runs down the hall with the pack when it’s time for a treat and is the first one to sit! I think it has been truly beneficial to him to have other dogs in his home to show him the way. There’s a peace about him now as well as joy on his face every day. He may not be able to see us but he certainly feels our energy.

Our next grand adventure will be this summer when we all head to Dog Beach in San Diego. I can’t wait to see the look on his face when he feels the sand, the surf and the ultimate freedom Dog Beach brings.