This post is part of a series on amazing blind dogs.
by Tiffany Morrissey-Gollem

My husband and I used to laugh at our yellow lab, Neptune, when he would longingly gaze at himself in the mirror. We humorously called him the “narcissist dog”, but little did we know at the time what was behind his lengthy stares. Neptune was the typical lab that loved to catch and retrieve, swim and go for runs and long walks. Just the mention of the “w” word took him from sleeping seemingly lifeless to up at attention wagging his body from head to tail in anticipation. Neptune could go anywhere with us and he loved new adventures. It didn’t matter if it was a 10 mile hike, swimming across the lake or river or hangin’ with the pack doing some outdoor shopping. Among his favorite activities was to run off leash and let his spirit free.

When he was about four years old, one evening we went for one of our usual walks. It was dusk just after dinner. Neptune took off to do his “run” on the dirt road sandwiched between two canals. As we watched him run along one of the canals, he suddenly ran off track and into the canal. This wasn’t his normal voluntary plunge to go swimming; it was something we hadn’t seen him do. Those lengthy stares in the mirror finally made sense. This was our first warning that something was wrong with his vision. We later noticed when we played catch with him in lower light conditions he had trouble catching the ball. We took him to the vet who referred us to an animal ophthalmologist (I didn’t know there was such as thing). The ophthalmologist did several tests and confirmed Neptune had PRA (progressive retinal atrophy). She told us that he would eventually lose his vision. She explained that PRA is a genetic condition, believed to be auto-immune in nature, in which the body attacks the retina of the eye. Certain dog breeds tend to be more prone to PRA…labs being one. Our first thought was sadness for Neptune. He was such a great dog and loved to play catch/retrieve, swim, and go for hikes all that require good eye sight. The ophthalmologist said that we were lucky that his vision didn’t start deteriorating earlier than it did. Typically, dogs with PRA show signs of vision impairment at one to two years of age. She also said vision impairment is first noticeable in low/no light conditions. She told us that his vision loss would be gradual and that dogs adjust surprisingly well. I got on the internet and read all that I could find to learn about PRA. In my research I learned that a form of PRA can be completely avoided with responsible breeding. The test is called the Optigen prcd-PRA test. To learn more go to optigen.com.

Over the years Neptune adjusted very well to his new challenge. We continued to take him everywhere with us and he continued enjoying the things he loved to do… run, walk, swim just in a different way. While he still had some sight, we worked with him to trust our commands such as walking up and down stairs, swimming, and believe it or not, to retrieve things. He was incredibly smart and had a terrific memory. He truly amazed us at times. He had adjusted so well we sometimes forgot he had a problem with vision. When we moved from the house where he spent the first 9 years of his life to a new one, we realized the extent of his vision loss. His well learned path that had been etched in memory was now replaced with a new maze confused with randomly placed boxes and objects. He initially bumped his way around but quickly etched in his new floor plan. 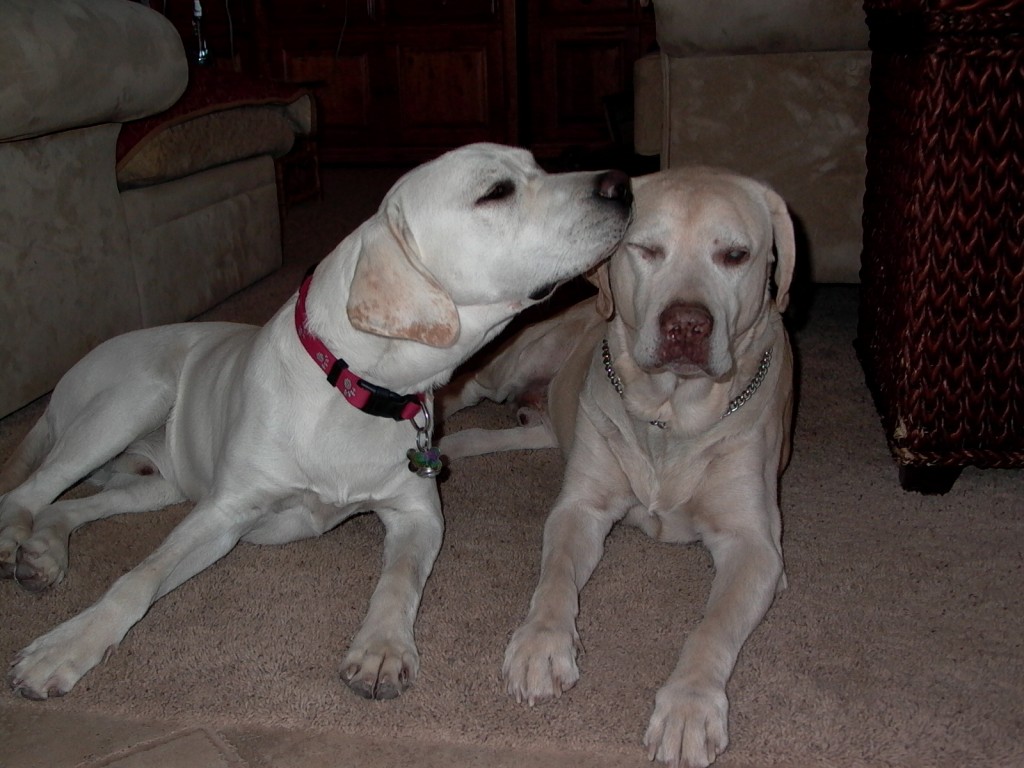 At age 10, Neptune was faced with another challenge, Diabetes. We began insulin shots twice daily and with a few trials were able to get his blood glucose under good control. We began looking to get another dog. Neptune was getting up there in age and we thought a “brother” or “sister” would be a great for him and help us adjust when the time came for Neptune to leave us. Neptune was such extraordinary dog; there was no doubt in our minds that we wanted another lab. Our searches finally lead us to, Triton, a beautiful yellow lab puppy. We decided to continue the Greek/Roman god theme, thus the name Triton. In mythology, Neptune (Roman: god of the sea) and Triton (Greek: messenger of the sea) are father and son. At first Neptune didn’t quite know what to think of this new little guy incessantly nipping at his body but quickly became fast friends with his new “little brother”. Triton brought a new energy to Neptune. Neptune now had a forever friend, playmate and well…sometimes a pesky little brother who had boundless energy. As Triton grew older he sensed something was different about his big brother. If Neptune got out of his sight for too long he would go find Neptune. The noise of Triton’s jingling collar allowed Neptune to follow his brother around our acre sized yard. Seeing the love and joy these dogs shared made us wish we would have gotten a second dog long ago. 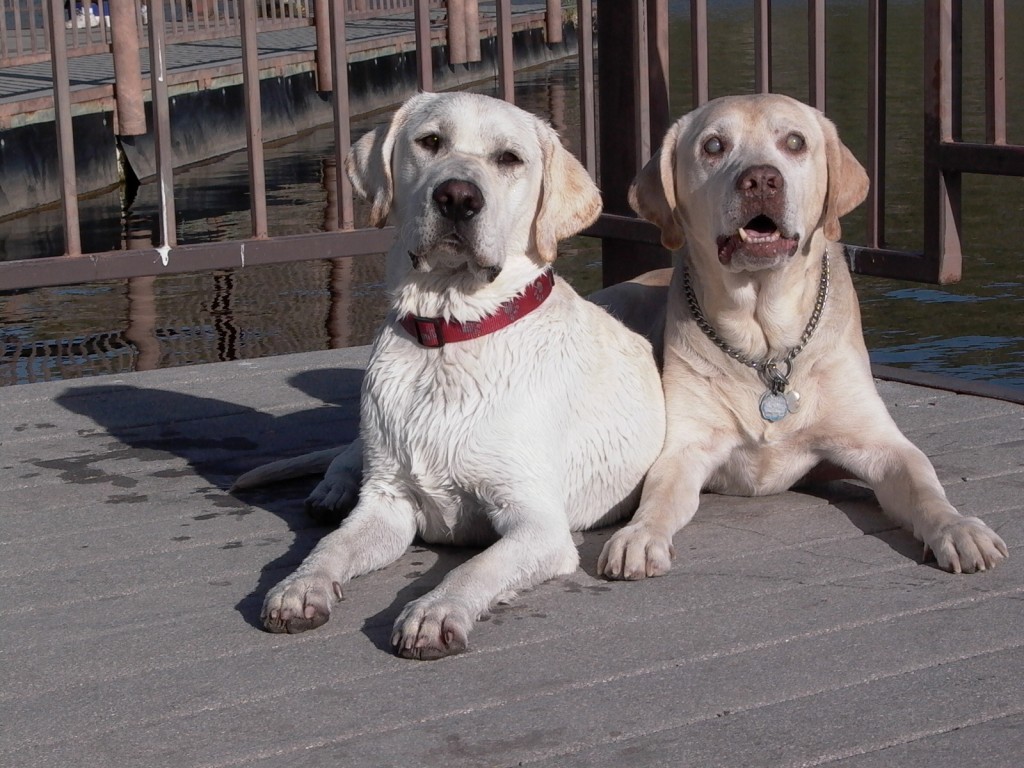 Just shy of his 13th birthday, Neptune became unable to get up or walk. The vet suspected a spinal tumor. Triton inherently knew something was wrong with his brother and laid by Neptune’s side for comfort. We had to make one of the hardest decisions and lay Neptune down for his final sleep. Over our years with Neptune, people told us that most people would have not kept blind dog like Neptune. Our love for Neptune was boundless and we never thought of disposing of him because he couldn’t see. Neptune taught us many things…that obstacles not only can make one stronger but the lives of others around us richer.