When I travel, I often snap photos of the dogs I see along the way. And, I rarely pass up an opportunity to say hello. Many of the dogs make me smile, but some, like the street dogs in Thailand and Puerto Rico, make me cry. During the 2013 world trip, I was slightly obsessed with dog watching, as we had recently lost our beloved Cain and Piper. I wondered if it was a bit odd to be snapping photos of so many dogs that I don’t know. But, when we returned, I found several Facebook groups, like Dog Spotting and Cool Dogs, and was happy to see that I’m not the only one!

Here are some of the dogs we’ve seen on our travels around the world.

This friendly, mellow guy belonged to one of the beach bar staff. He came over to say hi several times while we hung out. 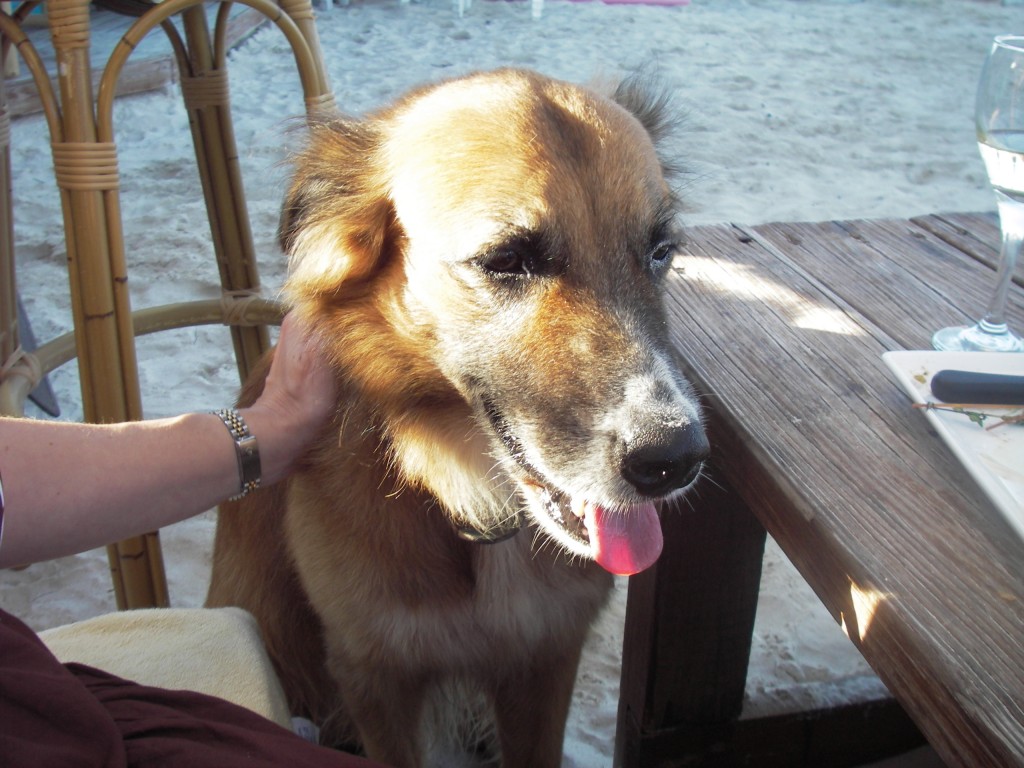 I watched this pretty girl play in the waves and chill on the beach near our hotel. 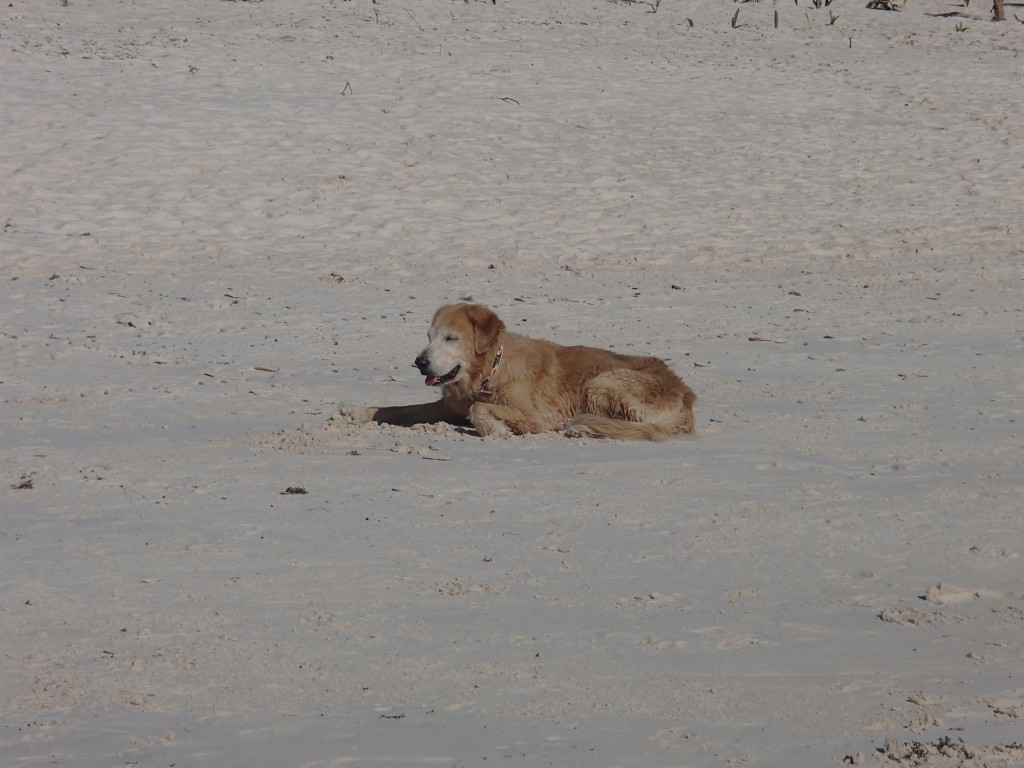 We saw this happy little guy in Chinatown. 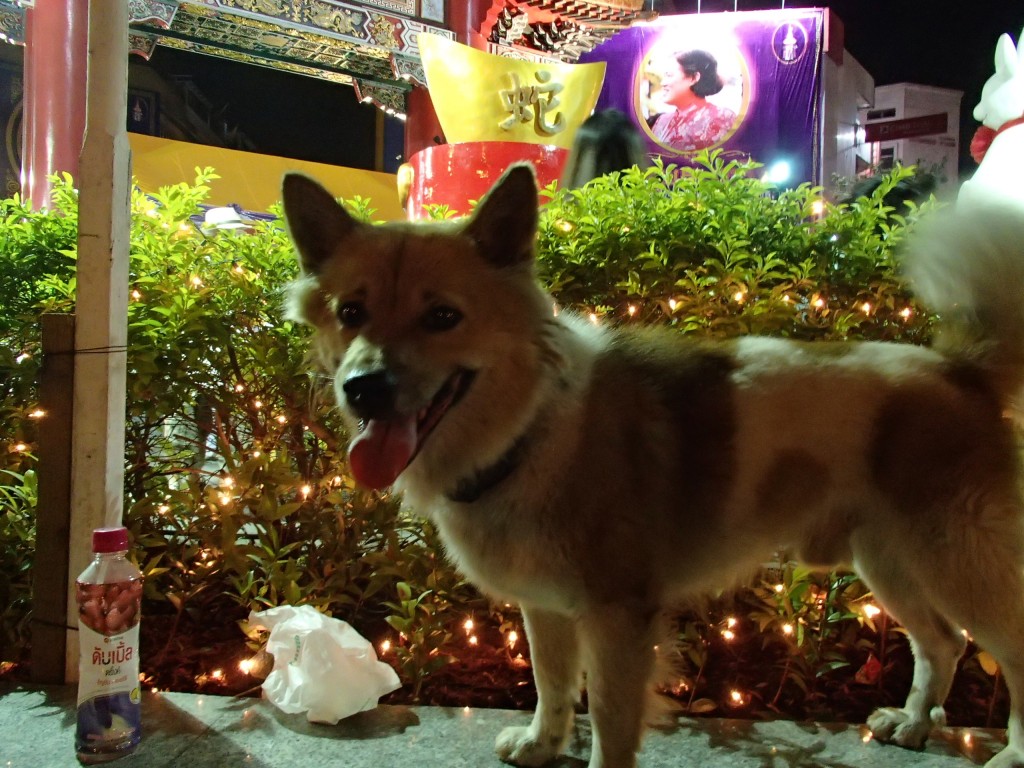 Puppy love! We met this adorable baby one night in a shop next to our favorite restaurant. The next day I bought dog biscuits and went back, but he wasn’t there. We popped in a few more times before leaving, but didn’t see him again. 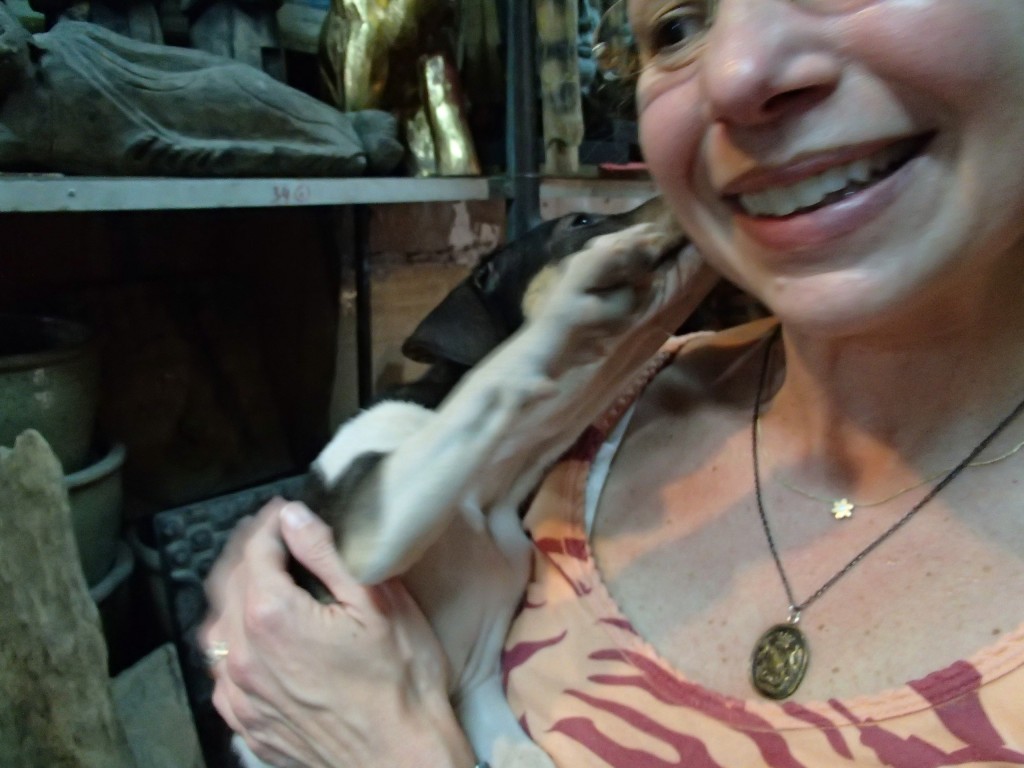 We regularly spotted the two resident dogs at the family-owned hotel Viang Yonok where we stayed. 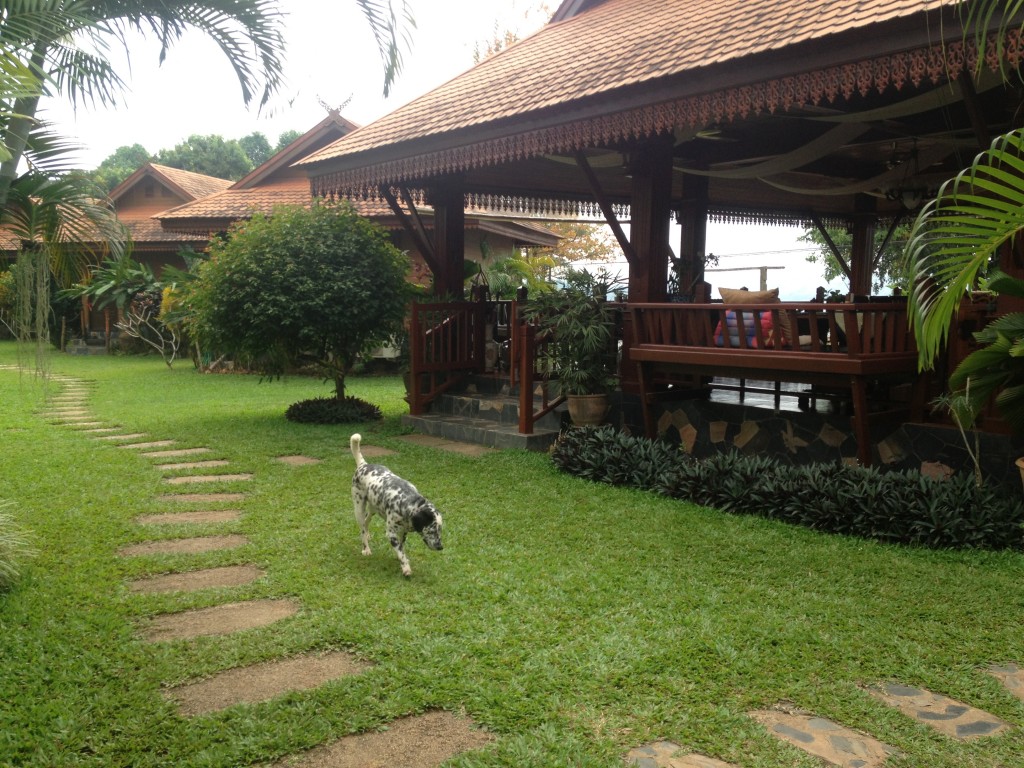 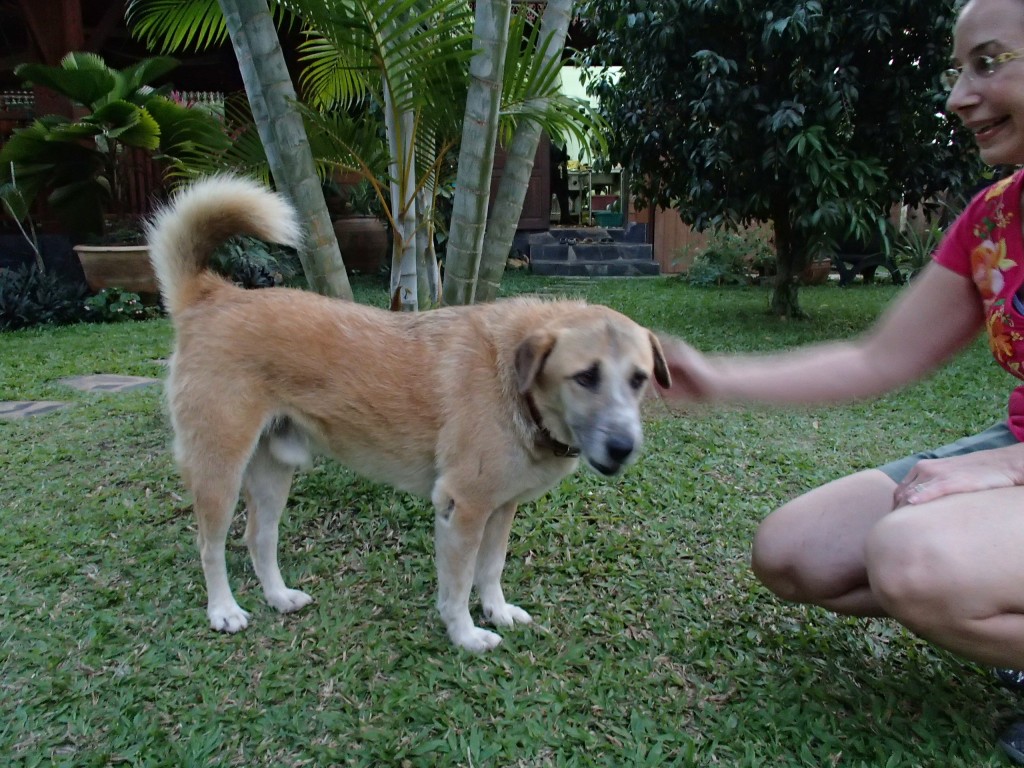 While I loved many things about Thailand, I was often sad to see so many street dogs. Koh Phangan was particular impactful – in good and sad ways. Shortly after checking in to our flat, I noticed this sweet guy and later learned that he had an owner, a fisherman, who neglected him. Sandy (as I nicknamed him) came by our flat a few times while Michael was cooking and we gave him fresh water and the biscuits I bought in Chiang Mai. We also saw the people in the next flat feed him. 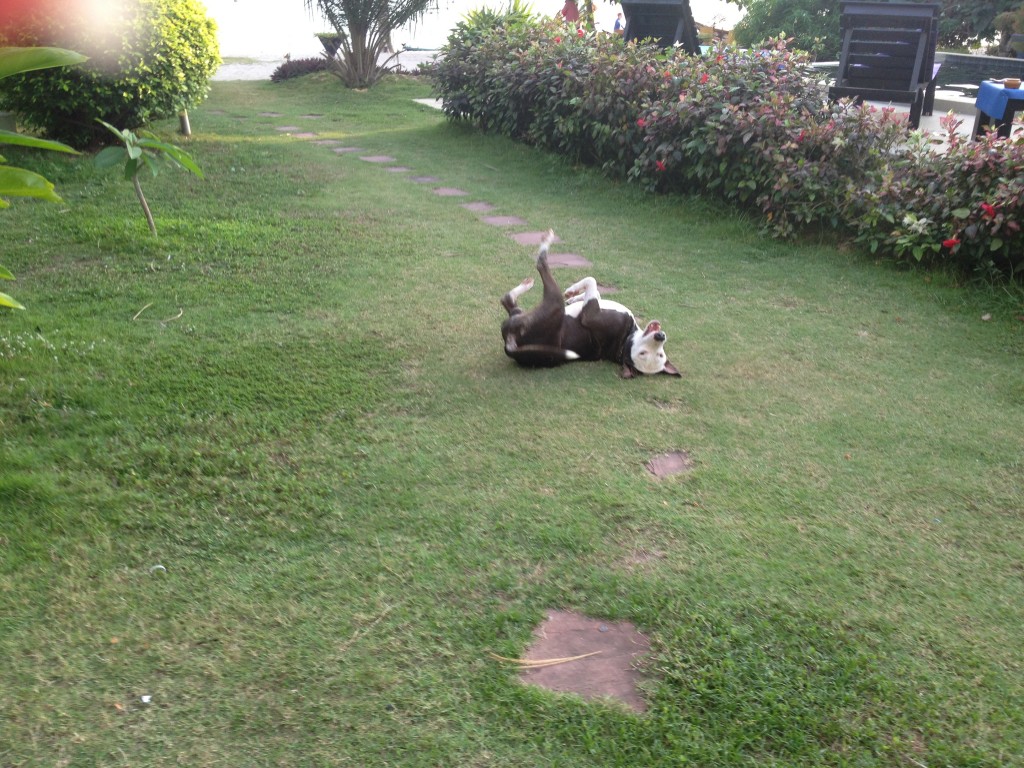 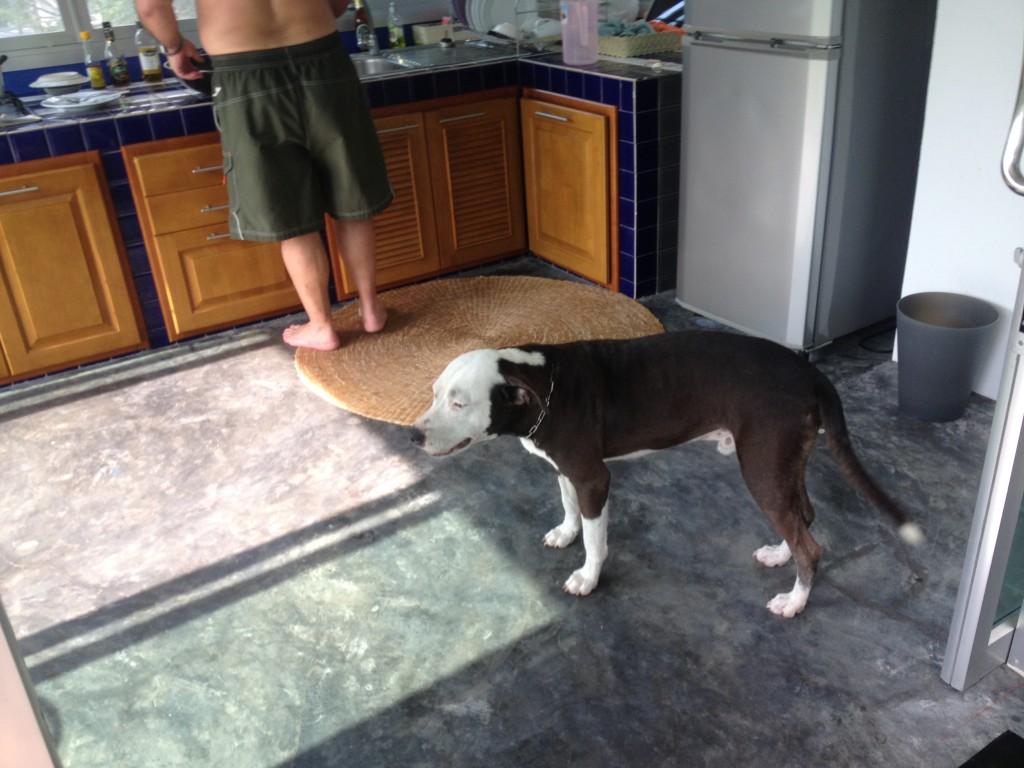 This pair, former street dogs, was adopted by the staff at the hotel/bar next door. We saw them every day romping on the beach and then curling up behind the bar for a nap. 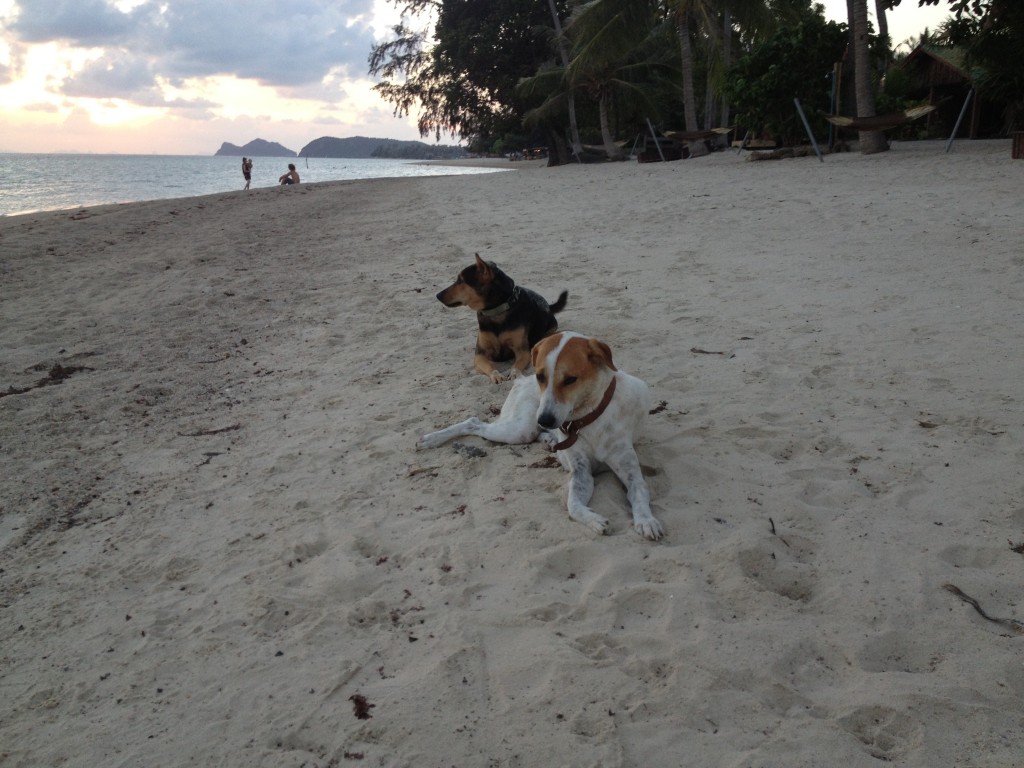 While flipping through a tourist guide, I saw an ad for a local animal care center – Phangan Animal Care. I posted a note on their Facebook page and they invited us to stop by. The NGO is the only group that provides desperately needed medical care to the island’s street dogs. See our travel blog post about Stray Dogs in Thailand >

We saw several beauties enjoying their lives at the beautiful South Africa wineries. 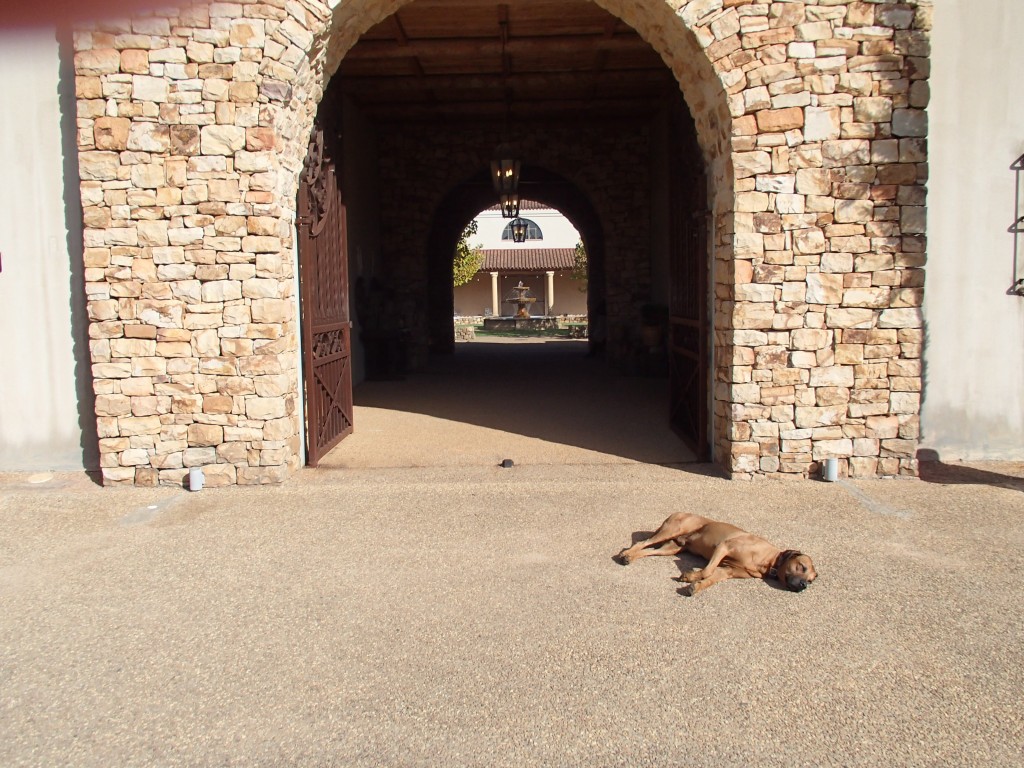 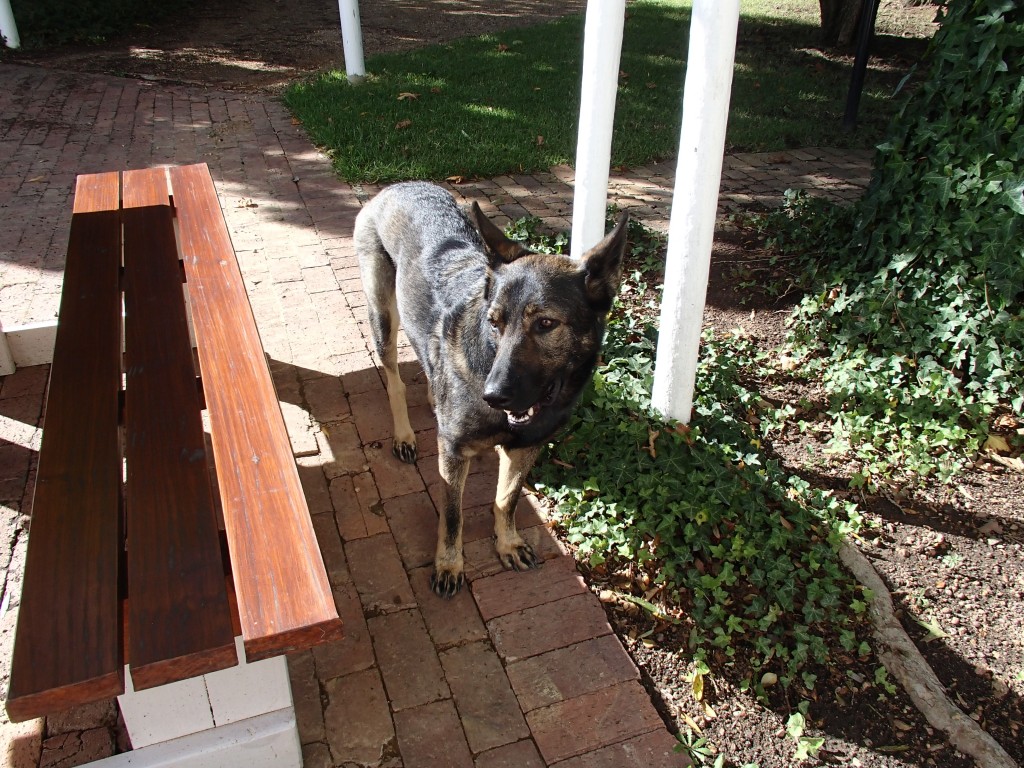 How cute is this! We stopped at a bar in Placa de George Orwell to grab a drink and watched this little one patiently trying to get his owner’s attention. 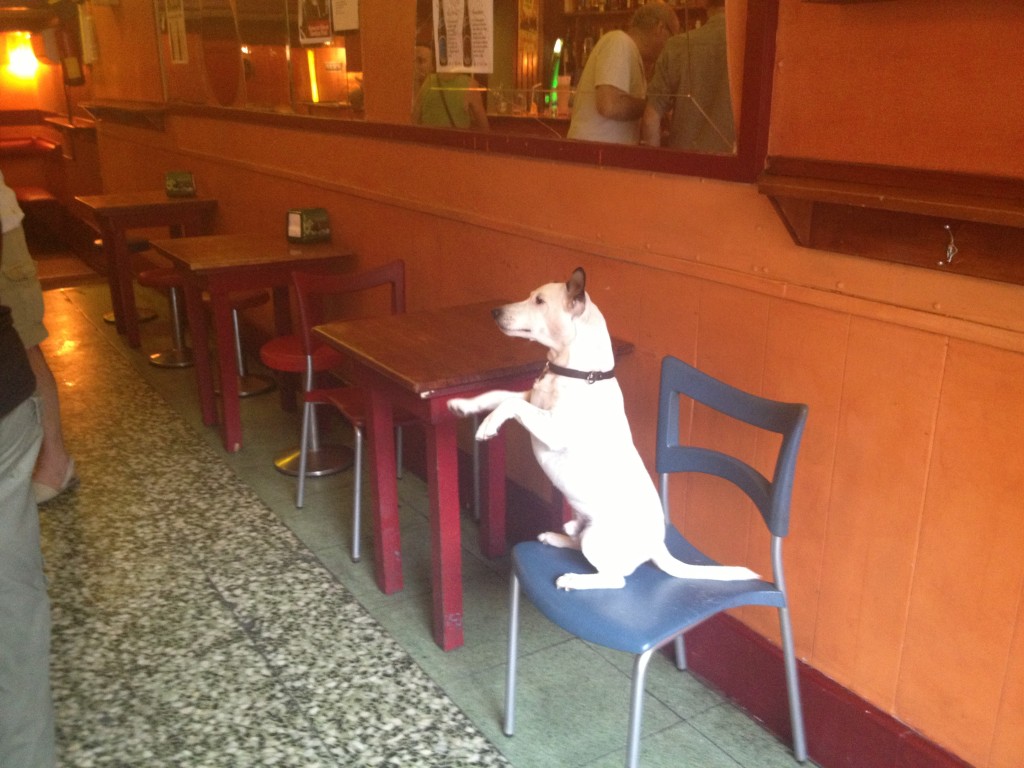 This gorgeous girl belongs to a truffle farmer / nursery owner who graciously spent the day showing us his farm and business. 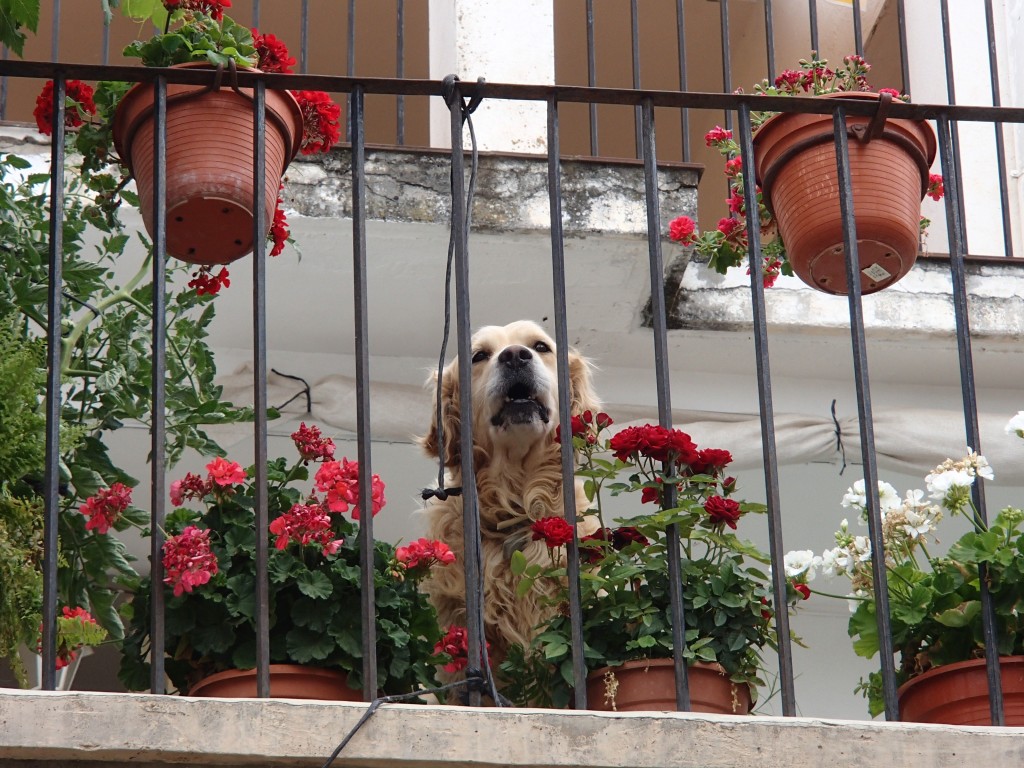 I loved this quaint little town on the Rio de La Plata, but was sad to see so many street dogs. The morning we left, it was chilly and rainy – there were two dogs huddled on the concrete against the ferry terminal below an
overhang. 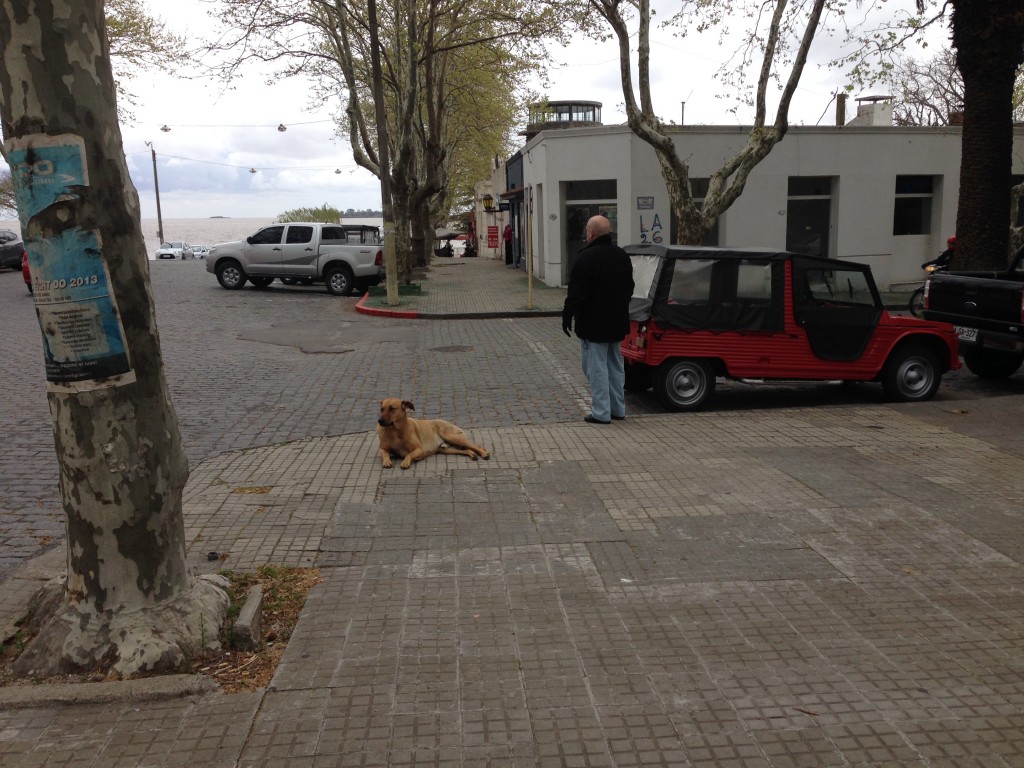 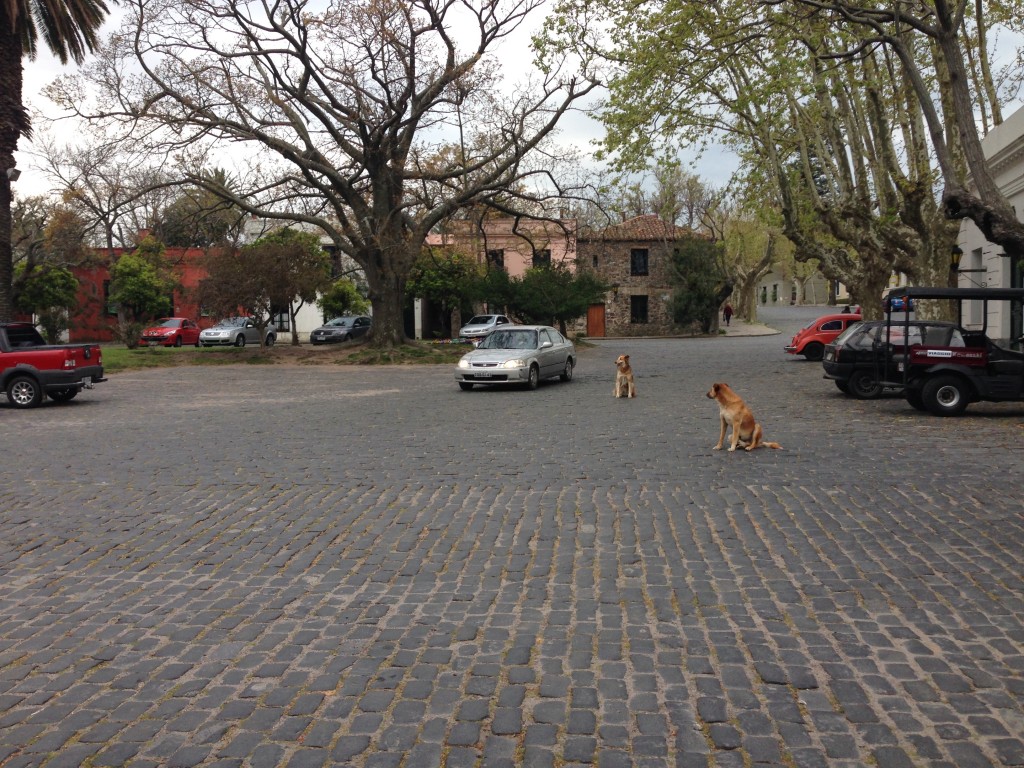 This pretty Labrador was chilling in the entryway of a souvenir shop near the main plaza. 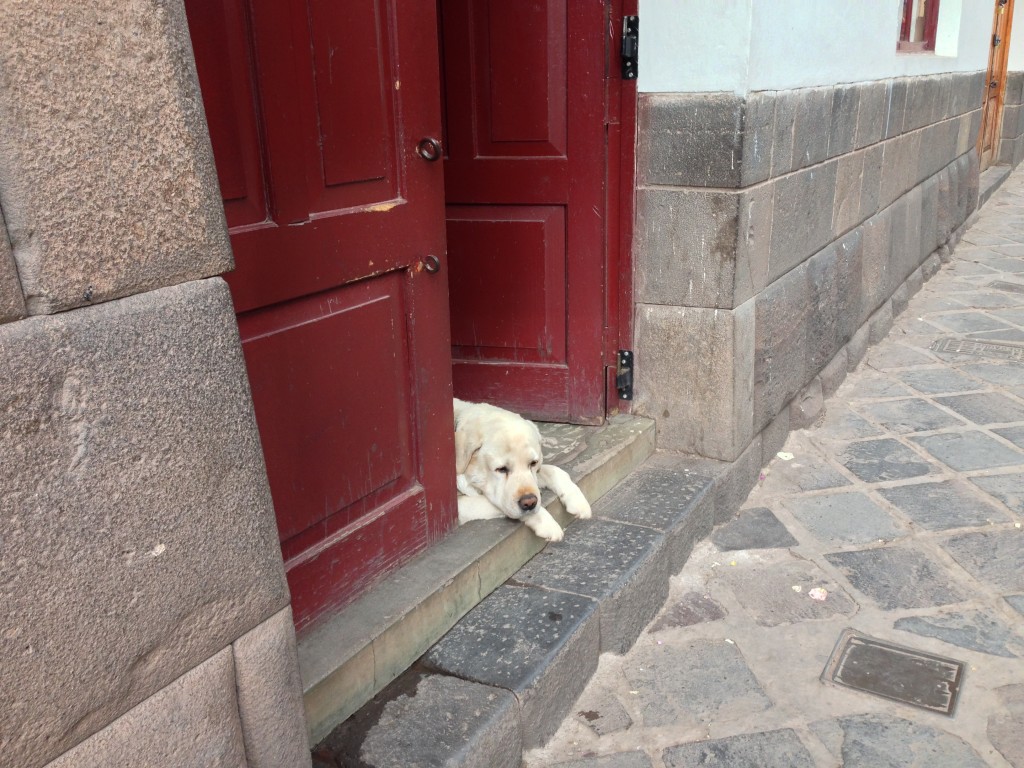