I am really into history and travel, and whenever possible, I combine the two. One historical period that particularly captures my attention is World War II and the Holocaust, probably because I am Jewish. I have visited historical World War II sites, like the D-Day Beaches and American Cemetery in Normandy, France. When Michael and I planned our 2013 world trip, one of the must-see destinations was Berlin. Unbeknownst to us beforehand, we visited during the citywide history event, Diversity Destroyed.

I’ve been planning to write this post since our April visit to Berlin. When I saw that today was the 80th anniversary of Night of the Broken Glass (Kristallnacht) in Munich, and the final day of Diversity Destroyed, I thought it was the perfect day to write about the event.

I wrote in our World Trip Blog that one of the things which stood out about Berlin was an atmosphere of renewal. While the city moves forward, it also places great importance on remembering the past – even a painful past. Diversity Destroyed was a nine-month citywide event that commemorated the rich diversity the Nazis destroyed, while also celebrating the diversity that has returned to the city. We only saw a sampling of the 500+ exhibits and events – mostly outdoor displays that we ran into as we explored the city.

A row of giant storyboards provided a timeline of the Nazi’s rise to power and subsequent atrocities. 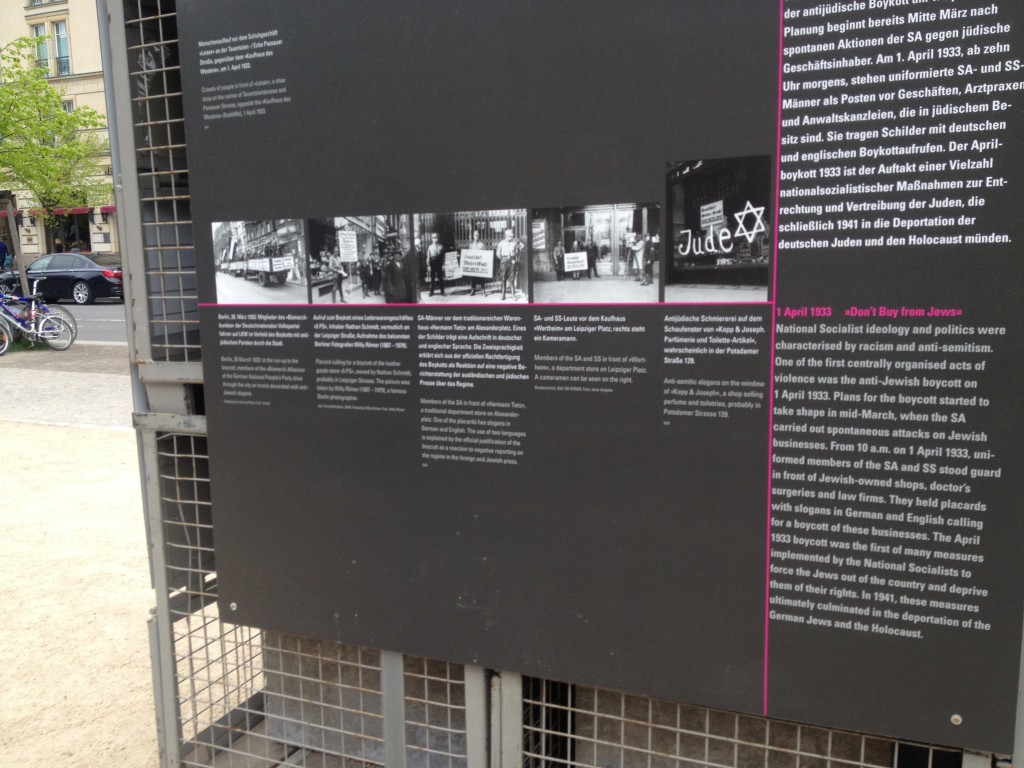 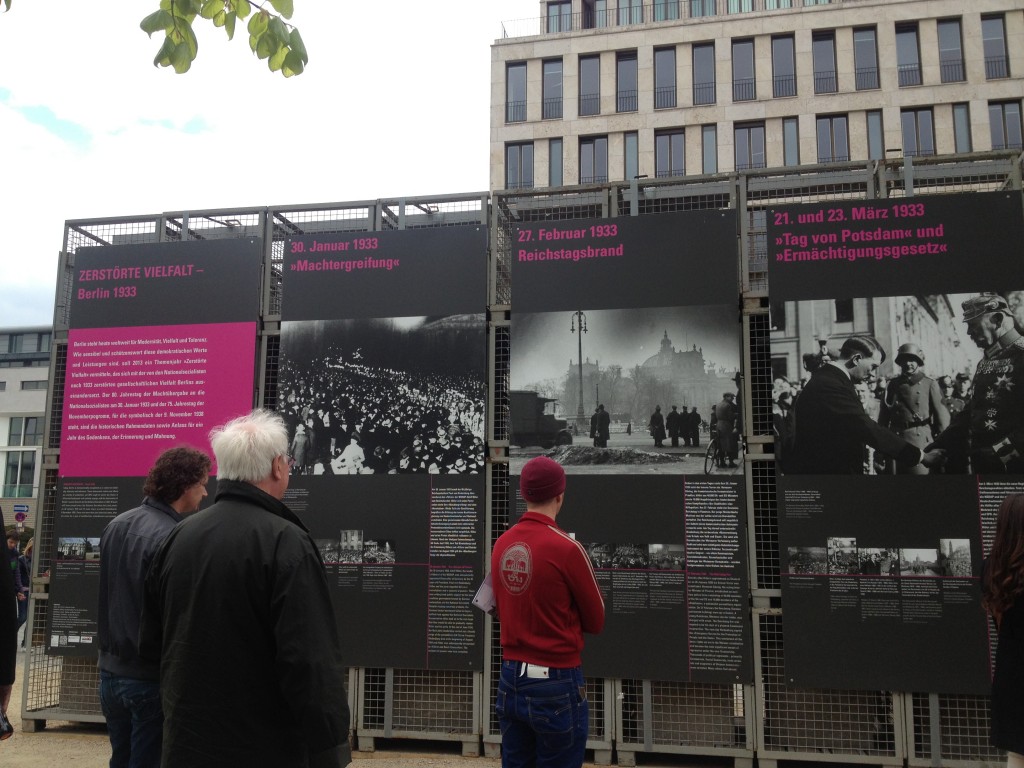 One of the most striking displays was the Portrait Exhibition of scientists, doctors, teachers, lawyers, writers, actors, composers, and artists who found their lives in danger after the Nazi rise to power. We wandered through a sea of giant pillars, looked at the faces, and read their stories. Some fled Germany and others could not escape the concentration camps. Here are two examples of the 200 portraits on display. 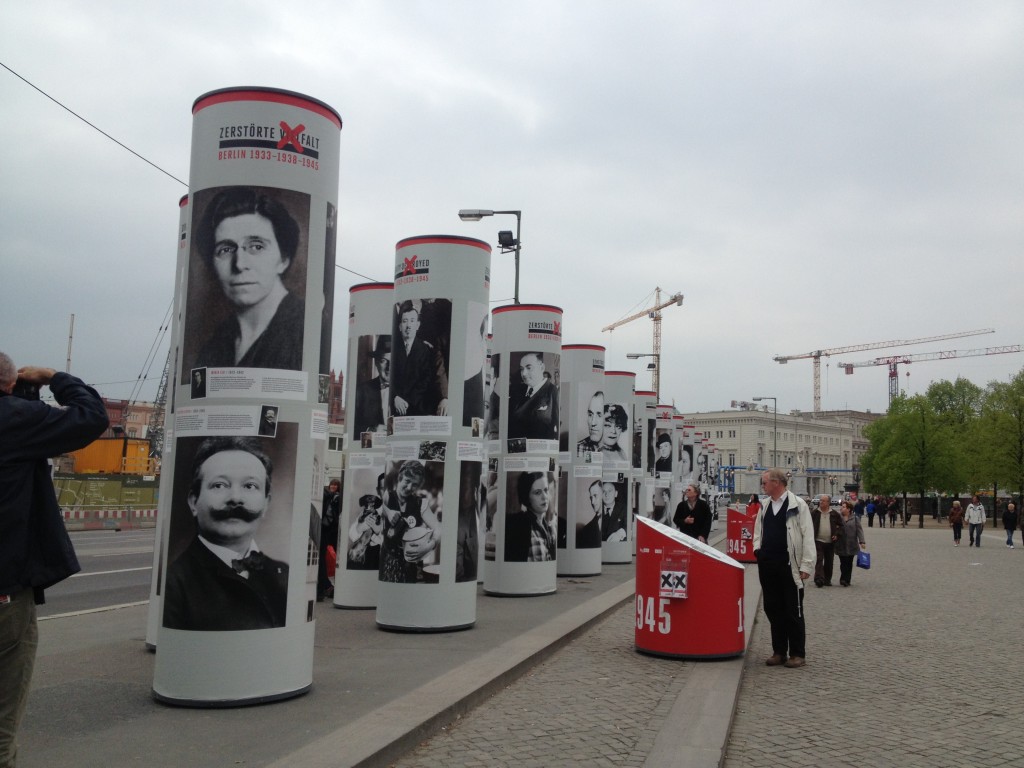 Diversity Destroyed was a “year of commemoration, remembrance and active engagement with history.” Cheers to the State of Berlin and collaborators for producing an informative, interesting, and thought-provoking event!

Although Diversity Destroyed has concluded, you can still visit several permanent museums and memorials that remember the millions who were persecuted and murdered during the mid 20th century.

Memorial to the Murdered Jews of Europe
This place is amazing! The information center features a number of exhibits and database archive. I was drawn to the letters people wrote in a final effort to tell family and friends of their fate. One letter was found near the train tracks – thrown from the train by a person on the way to a concentration camp. The outdoor maze of 2,700 concrete pillars is a peaceful place to reflect and remember. 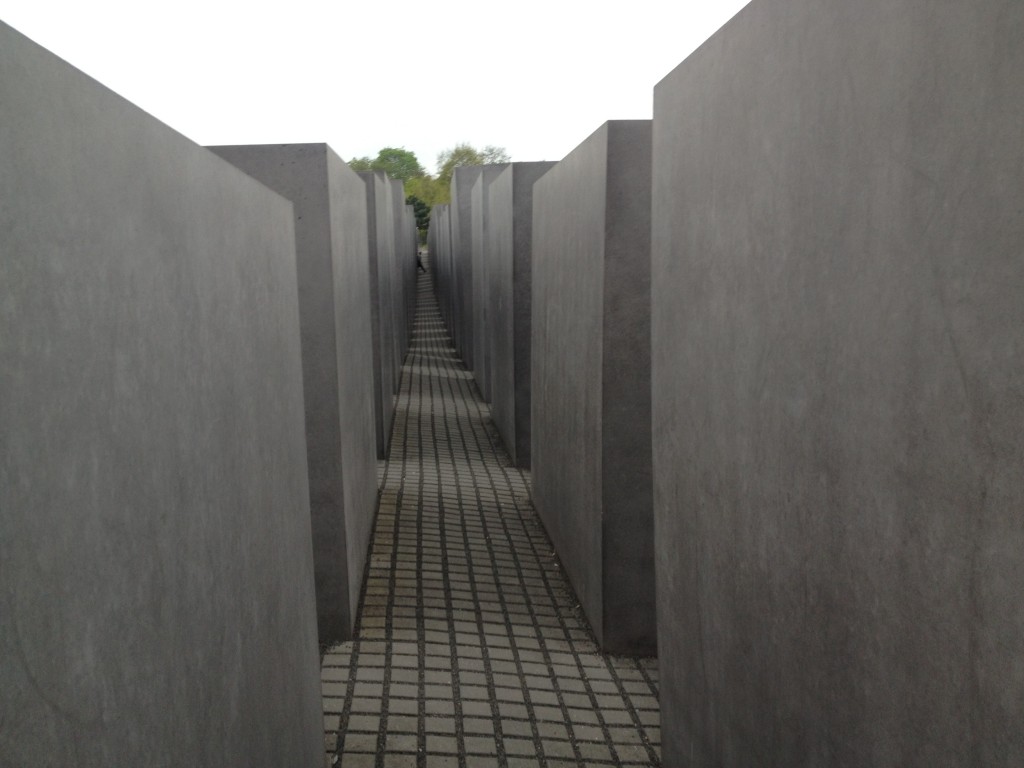 Memorial to the Sinti and Roma of Europe Murdered under the National Socialist Regime
The outdoor memorial tells the story of the Nazi persecution of the ‘gypsies’ in Europe. In 1940, the Nazis started deporting gypsies from Germany to labor camps in occupied Poland. The following year, mass shootings began in occupied Russia. In 1943, thousands of gypsies throughout Europe were deported to Auschwitz-Birkenau. 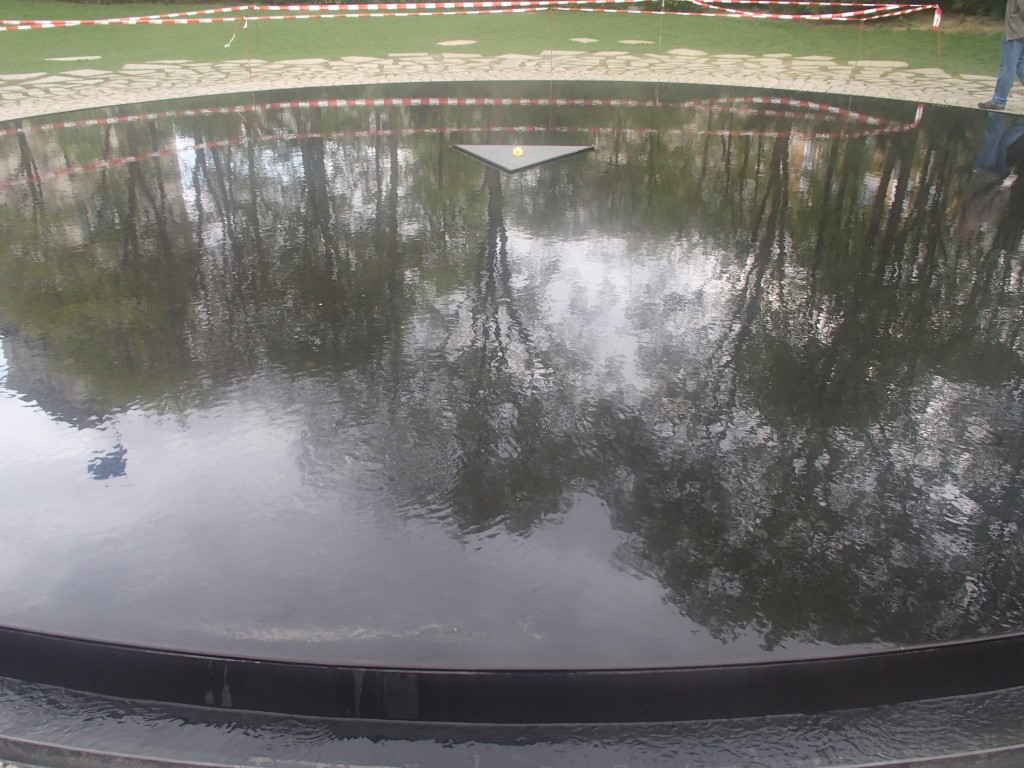 Jewish Museum
The museum includes several exhibit spaces dedicated to the Holocaust. When you enter the Holocaust Tower and close the big heavy door, you are faced with darkness and silence and have nothing to do but think about the victims. The outdoor Garden of Exile symbolizes the people who had to leave their homes. 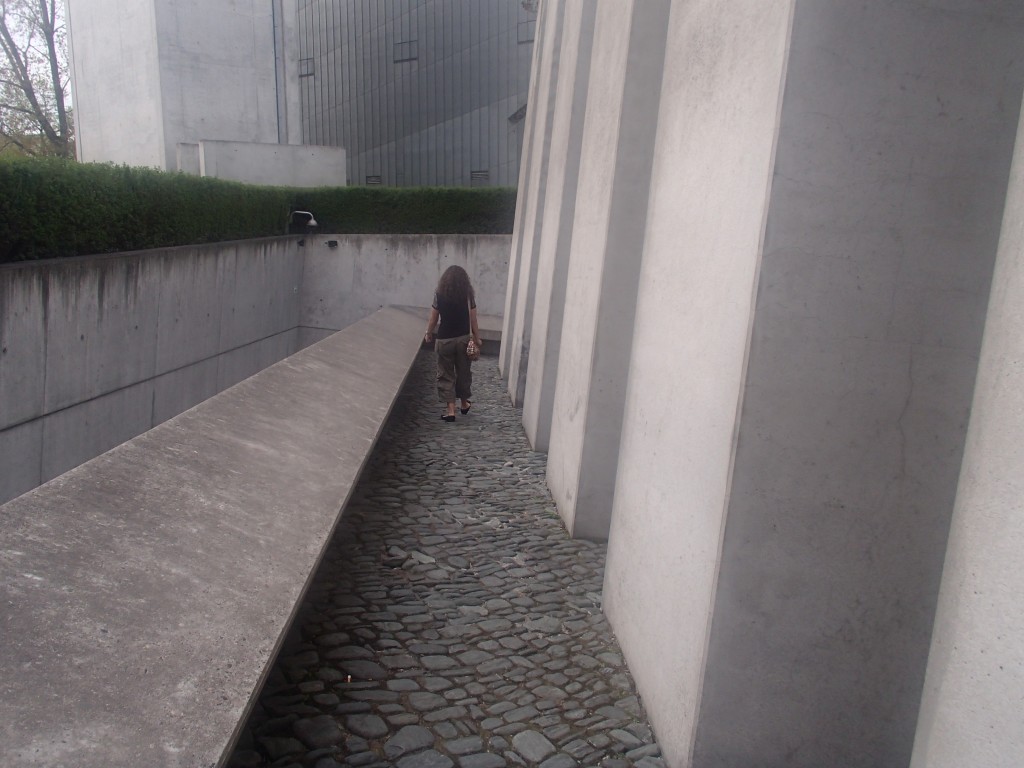 The New Guardhouse (Neue Wache) is memorial to the victims of war and tyranny. It commemorates three periods in history: Wars of Liberation, World War I, and 20th century Fascism and militarism. 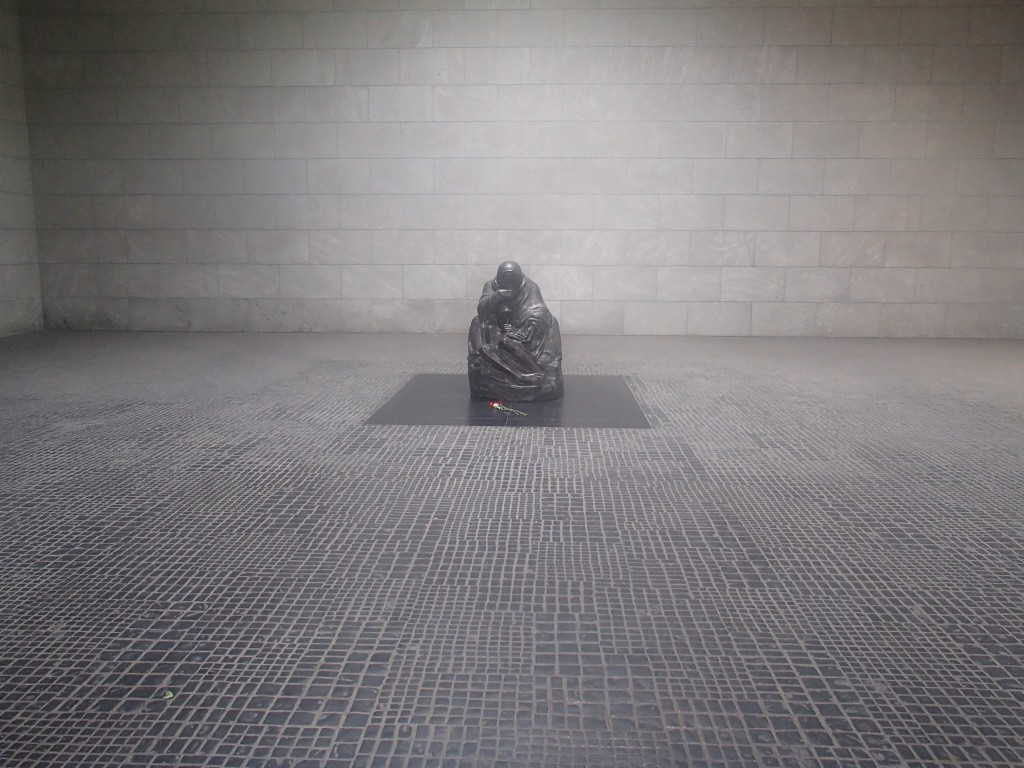 We didn’t get to see the Memorial to the Homosexuals Persecuted under the National Socialist Regime.